P.O.P. and Ad Specialty NEWS…
You heard it here first! 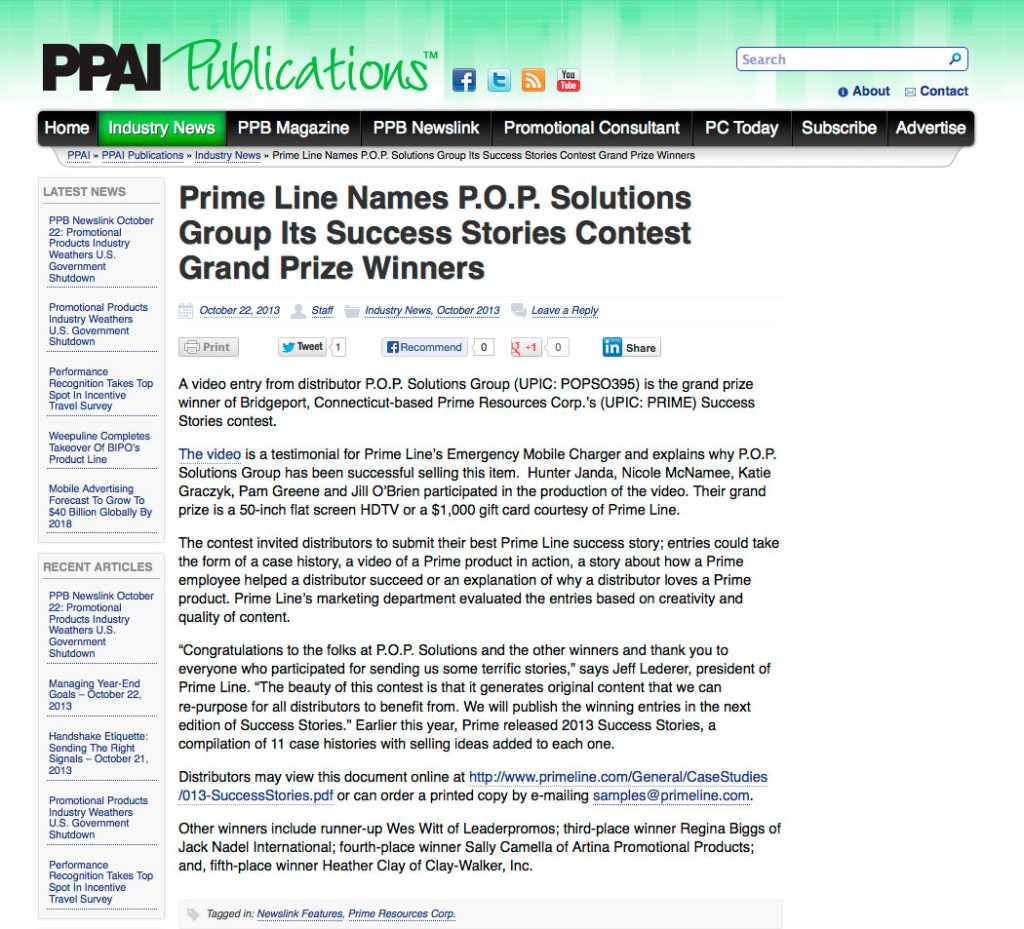 Leadership Germantown and The Germantown Festival Committee are working together to promote the 2013 Festival weekend (September 7th & 8th) with commemorative t-shirts. Leadership Germantown was looking for a fundraising opportunity to help fund their programs and their PLUS Scholarship Fund. Both organizations have a common goal of supporting local high school students with scholarships, and this was a natural fit for a joint effort. Moya Dent Leadership Germantown chairman said. “We are thrilled to be a part of promoting the Festival . It is a treasured institution that not only brings economic benefit to Germantown but also the goodwill and tradition that makes our community such a special place.” The t-shirts were designed by local graphic designer, Amber Abney, and were provided by P.O.P. Solution Group. Leadership Germantown will have two booths at the Festival to sell the shirts’. They will also be offering Voter. Registration as a service to the community. 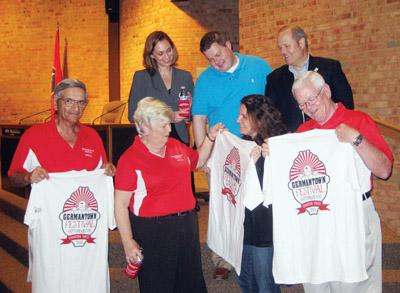 Katie Graczyk and Ally Guscette of P.O.P. Solutions Group, LLC have been awarded with a Bachelor of Advertising Specialty Information (BASI) certification. This is the industry equivalent of a bachelor’s degree. BASI holders are recognized as industry experts who have the knowledge they need to thoroughly understand and navigate the promotional products marketplace in order to provide clients with expert brand building ideas.

“We are so proud of the graduates of the Advertising Specialty Institute Certification Program,” said Timothy M. Andrews, ASI President and Chief Executive Officer. “We launched this program to provide members with the skills they need to out-think, out-perform and out-service the competition. We couldn’t be happier so many members are seizing the opportunity to set themselves apart through quality education.”

The Advertising Specialty Institute® (ASI) recently released results from a global survey proving promotional products give consumers a more favorable impression of advertisers in every international city surveyed and deliver commanding advertiser recall among 87% of all recipients – up four percentage points over 2010.

The study shows that with a cost per impression* at about half a penny, promotional products offer the best value when compared to local TV or radio, at a fraction of the production cost.  Additionally, results show promotional products are consistently popular and persistent, with most people owning about 10 items they generally keep for nearly six months, a far longer time period than any other form of advertising.
Highlights from the Global Advertising Specialties Impressions Study V.3 include:

• Cost Per Impression. In the U.S., the cost per impression of a promotional product is 0.6 cents, compared to prime-time TV and national magazines at 1.8 cents each and 0.7 cents for newspapers.
• Worldwide Wow. Over one-half (52%) of the time, products give consumers a more favorable impression of the advertiser, a trend seen in every country surveyed.
• Generating New Business. One-third of U.S. consumers say they are more likely to do business with an advertiser after getting their logoed product.
• Latino Market Magnet. At 54%, Latino consumers own the most promotional T-shirts.
• Mais Oui. Parisians are far more likely to own promotional USB drives than consumers in other cities, with 27% owning them, versus 9% of U.S. consumers.
• Safe, Healthy Cities. In Dallas and Montreal, 11% of consumers own promotional health and safety items, versus the U.S. average of 8%.
• Top 3 Products. Writing instruments (50%), shirts (43%) and bags (29%) were the most popular products by category in the U.S.
• Superior Pass-Along Value. Sixty-six percent of U.S. respondents give away unwanted items to someone else, up 15 percentage points from 2008.
• Bags are Big. In the U.S., 29% of consumers who own promo products own a promotional bag, with Asian consumers owning the most of any racial demographic.
• Voters Speak. More Independents (48%) than Republicans (44%) and Democrats (39%) have a logoed shirt at home.
• Golden Oldie. As consumers age, they’re more likely to own a promotional calendar.
• In the Office. Women are more likely to own a promo desk accessory in their offices than men, by a margin of 20% to 14%.
• Cap-Tastic. White men are the most likely demographic group to own branded caps, versus 15% of African Americans and 12% of women.
• Cheers. Gen-Xers and older own more promotional drinkware than those under 35. Of 12 cities surveyed, Philadelphians love logoed mugs and glasses the most, with 21% of Philly consumers owning promotional drinkware.
• You Wear it Well. Higher wage earners are more likely to own a promotional jacket.

“Other advertising mediums interrupt or even annoy consumers, but ad specialties actually provide something useful, like a pen to write with, a shirt to wear or a calendar to pick a date,” said Timothy M. Andrews, president and chief executive officer of ASI. “Not only do ad specialties make impressions on everyone who sees them, but messaging is reinforced every time the item is used. No other form of media can allow the advertiser to so closely tie a benefit to the recipient.”

*Numbers derived by ASI from data provided by The Nielsen Company and ComScore Ad Metrix. Study was conducted from July through September of 2012. Interviews with consumers took place in 12 North American and European cities.

– 23.6% of all mail sent in the United States is addressed inaccurately (USPS)
– The quality of U.S. addresses declined by 17 percent each year (USPS)
– Internal duplication rates of up to 20% are not uncommon (Dun & Bradstreet)
– 42% of businesses make no effort to measure data quality (The Information Difference)
– 42% of you are staking your future on what is effectively a blind data date
– U.S. businesses waste more than $600 billion each year due to defective data (TDWI)
– Direct Marketing has bucked the downturn in advertising by contributing GBP50.5 billion to the United Kingdom economy in 2007, a growth of 15.4% on the previous year, according to the DMA’s Economic Impact of the Direct Marketing Industry 2008
07/06/10
Houston, Texas, supplier LandesUSA

(UPIC: Landes) has ramped up its domestic sewing capacity to build absorbent sheets for a local environmental company to aid in cleaning up the oil spill in the Gulf of Mexico.

The company sews a one-inch piece of webbing to fabric sheets 18 inches by 75 feet used as “sweeps” to absorb the oil, says Sonny DeShong, president of Landes. The company’s 30 employees are producing 1,800 units a week, he says.

“The volume is tremendous,” DeShong says. “Our employees have already put 224 man-hours in production of the sweeps.”

DeShong, a native Houstonian, says he is excited to help with the clean-up effort.

“The Gulf of Mexico is a cherished part of our landscape here in Texas, and we are thrilled to be able to participate in the effort to restore the gulf coast beaches and marshlands for our neighbors to the east,” he says. “From the beach at Gulf Shores to the canals and marshes of Venice, Louisiana, I’ve witnessed firsthand the beauty of this region, and we are all crushed by the tragedy of this event. We will do all we can to aid in the cleanup.”

After extensive floor debate and committee compromises in Congress, President Obama has now signed a sweeping health care reform bill that will affect every American, from the uninsured to the wealthy business owner. Besides eventually offering nearly universal health care, providing subsidies to certain families and awarding tax credits to small businesses, the bill includes provisions requiring drug and device companies to publicly report payments they make to doctors. A companion bill, which is likely to be passed in the U.S. Senate, will force the public reporting of any payment or gift given to a doctor that is $5 or greater in value.
To read more, click here.
03/2010
FDA Bans Tobacco Companies Use of Promotional Products

Tobacco companies will be barred from distributing branded merchandise under new provisions enacted by the Food and Drug Administration. The restrictions, which go into effect June 22, have already been in place for over a decade in all but four states as a result of a 1998 legal settlement (Florida, Minnesota, Mississippi and Texas had reached separate agreements). The new regulations enforced by the FDA expand the ban nationally and covers all tobacco companies and retailers. “The regulations being announced today are designed to prevent our children from becoming the next generation of Americans to die early from tobacco-related illnesses,” said Howard K. Koh, U.S. assistant secretary of health.
To read more, click here.